Sunday and Monday were interesting days out here. Mike Orlando – my kind host here in San Francisco whom I met while working at Kennolyn Camp near Santa Cruz – and I cruised down Highway 17, over the mountains and attended the 60th Summer Celebration and Reunion at our former stomping grounds.

It was good to be back among the redwood trees and to see so many familiar faces. Like the photo posted here inside the former Monie’s Boarding House, now Caldwell Lodge, of former fellow camp counselor, Fresno’s very own Michael “Funky Cold” Medina with the aforementioned kind host (who has sunshine coming from his behind, I might add).

It’s kind of weird going back to a place and spending time there as a former counselor six years removed. There were a few familiar faces from my time there. Of course the perennial Pat Veatch, the director Andrew and his wry, lovely and beloved wife Brenda and their three children (two of whom came along since I’ve worked there). 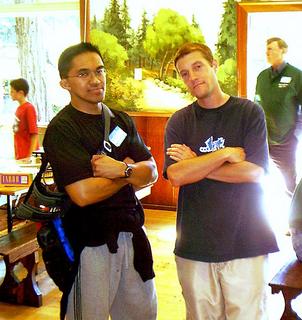 she’s around I’m Joe Daddy), who, after losing a bunch of weight, is looking simply marvelous. She’s a hoot in her own right, but get her talking about her job, and wow-ee.

Joann works for David Gest. Remember that guy a few years ago who married Liza Minelli? And they were plastered everywhere? And they were weird together? Yeah, well, she’s worked for him on-and-off for as long as I’ve known her. Ah, the funny stories.

I also got up on the camp’s high ropes course. Though I went there for my first summer in 1996 to teach photography, I quickly became intrigued by the ropes. Being scared of heights as I am would likely forbid me for partaking in the activity, but somehow I managed to conquer those fears and by 1997 I was a fully certified ropes course instructor.

But it’s been six years since I was up on any course and Kennolyn’s course is higher and more elaborate than likely any other (thanks to those redwood trees – some of the tallest trees in the world) and the excellent design crew who built them, Challenge Works (run by a former counselor and administrator at Kennolyn).

I hope to post photos of me up in the trees later, but wow. It was so scary, so fun and so rewarding to have done this again after my fears had returned. I did it. Not pretty, but I did it, made it up the Jacobs Ladder, over the Charlie Chaplin Walk, onto the platform, over the Islands in the Sky (…with my partner Michelle Ogren – who was one of my photography campers back in 1996 and now is the camp’s program director and a college graduate. That’s a little sobering.), and then down the Zip Line… What fun! And besides the big scrape on my leg, I made it down fine and exhilarated.

Mike, Mike and I made it down to Santa Cruz, had a couple beers at a sadly deteriorating 99 Bottles of Beer (an old favorite bar/hangout) and walked down Pacific, checked out all the new buildings and businesses and talked about the good old times. It was great. Oh, and we also stopped in for a slice of Pizza My Heart – quite possibly the best pizza ever (and for $5 you get a cool t-shirt and a slice of pizza).

We also drove through Capitola and saw the ocean… It was a good trip. We finished it up with Miklos (aka “Meatloaf”), our Hungarian friend, at Tony & Alba’s. Tired and exhausted we headed back to San Francisco.

Today being the first Tuesday of the month means I’m off to check out museums in San Francisco. Tonight, sleeping in the Marin Headlands at a youth hostel. Tomorrow, taking a train to Palm Springs…