After a slower start to the day today (I spent the morning doing laundry and updating the Blog), I got out and went to three museums and the San Francisco Library. Pretty good stuff.

First off went to the Asian Art Museum of San Francisco near the city’s very recognizable and beautiful City Hall. [I also passed by the San Francisco Opera House just as Liz, my oh-so-sweet girlfriend, was singing to me via my JoePod. Very, aaah, sweet.] I expected to be swept off my feet by the Asian museum, but wasn’t. Got in line briefly for the Tibetan exhibit, but got back out after realizing my time was limited and this line wasn’t. See, it was “Target Tuesday”. The Joe-likes-them department store Target sponsors the Tuesday free admission day and the place was loaded. And after looking at several Buddhas, well, one can only look at so many Buddhas, so many decorated bowls, so many whatevers before interest in what the next museum has to offer sets in heavy.

I left and stopped into the San Francisco library. Mike, my congenial host this week, suggested I stop by to see, as he terms it, the world’s most educated homeless population. I managed to find the San Fran historical section and read a bit about the Panama-Pacific International Exposition that happened in the city in 1915. They had some neat mementos and other knickknacks from the fair that were interesting to view. They also had some stuff on poet Robert Frost, who born in San Francisco but spent most of his formative years on the East Coast. [It’s funny how a city is quick to claim someone famous no matter how thin the connection.]

I then walked down Market Street, saw two dudes get into a fight as they got off the Muni (the name of the town’s bus system), one pushing the other in front of a moving car (luckily the car was able to stop in time to avoid hitting the guy) and headed for the Cartoon Art Museum. There I saw a neat exhibit on Garfield, plus some rare comic book mock-ups, including a reminder of my old favorite comic book hero as a child, someone I always referred to as Shazam!, but apparently is properly addressed as Captain Marvel (who knew?). I used to love that TV show as a kid…

There I also saw they had piece by The Cincinnati Enquirer’s Jim Borgman in their editorial cartooning section. Very neat to see Jim represented out here.

headed to the San Francisco Museum of Modern Art. It’s a tough call, but I think I liked this place the best (though the cartoon museum was really fun). The neatest, most amazing and unexpected thing today was seeing a work by Frida Kahlo, a self-portrait. I’ve tried to find an image of it on the Internet to show, but no luck.

I spent an hour or so talking to Liz on the phone this evening and hanging around Market Street. It was great to hear her voice (after a few days of not talking) and to catch up on the latest happenings in Cincinnati, in her life as she prepares for auditions in a few days and to hear the excitement she has for her brother upon the announcement of John Roberts being nominated for Chief Justice. 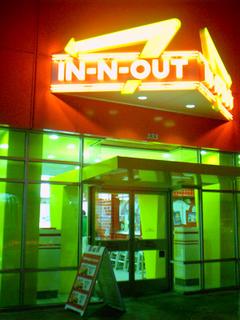 After hanging up the phone I continued down Market Street aiming to hit In ‘n Out (my second trip since I’ve been here – I love the place) at Fisherman’s Wharf (ah, the tacky touristy traps).

Meanwhile, I ran into another odd site along Market Street – some war protestors arguing with a belligerent homeless guy. The protesters were heading home – and I didn’t hear the beginning of this – but I did hear one of the funnier things I’ve heard so far on this trip.

The homeless guy told the two woman protestors who were carrying picketing signs: “I’ll stick my feet up both your assholes.” To which one of the women replied, “Ah, go whack off.” Funny stuff, even if the two sides were pretty hot at each other. I just imagined the homeless guy levitating as he ninja-moved his feet simultaneously up their behinds…Anyway, I digress…

I made it to In ‘n Out, ate meself a burger and then got on the bus back to Mike’s place in the Presidio, narrowly escaped an encounter with a skunk rummaging through garbage on the street and now bed awaits and a train ride southward tomorrow…