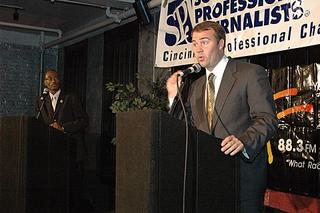 After this evening’s mayoral debate – sponsored by Cincinnati Advance, the Society of Professional Journalists, National Association of Black Journalists and WAIF-FM – between Ohio Senator Mark Mallory and Cincinnati City Councilman David Pepper, I headed home. No big deal. I had work to do. Only problem: I couldn’t get there.
Just about a block south of where I live a man fired shots from an assault rifle and then reportedly ran into the Belmont Cafe on Race Street, a few doors south of 12th Street – and just about a block south of where I live.
Workers at the bar then barricaded the door and wouldn’t let police in to investigate – a direct violation of state law. This then, according to police spokesman Lt. Kurt Byrd, sparked an intense police intervention. The kind of intervention that, ya know, brings out the S.W.A.T. and keeps people from going about their business – like going home.
That intervention included a six-block area around the scene – including where my apartment is located – being draped with yellow “Police Line – Do Not Cross” tape. The S.W.A.T. team was called, and a mini-convention of local media outlets – each TV station and newspaper well represented – all gathered to take it all in. I just wanted to go home.
I, with nothing better to do and unable to get to the pad, called an editor at the Enquirer to see if I could maybe at least earn a few dollars covering the story. The editor had dispatched the evening’s cops’ reporter to the scene, but he said he might want some photographs if “shooting broke out.”
Okay, then. I grabbed my camera and positioned myself with the other media folks.
All us journos sat around with our cameras and our notebooks aimed directly a half-block away, right at the front entrance of the Belmont. The TV folks aimed their microwave remote dishes straight at their respective newsrooms and went live at 11.
The most impressive part of the whole evening was the group arrival of the off-duty S.W.A.T. team members around 11:45 p.m. Central Parkway was closed and then all at once sirens and a convoy of private-person cars, trucks (lots of big pick-up trucks with large tires) and large police vans, cars and a big, black tank-looking truck with the large, wh 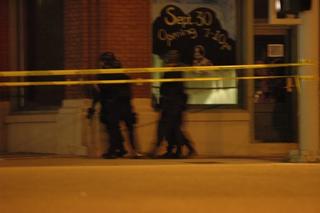 ite “S.W.A.T.” blazoned across the side zoomed past. Each vehicle had one person – presumably a member of the S.W.A.T. team – in it and they filed past us and headed for their staging area along 12th street. You know, near my bedroom window (the one where the crack addicts usually indulge in…well, lots of stuff).
S.W.A.T. went in a little later and then we waited. Nothing happened.
We waited longer and still not much happened after then news-wise and that’s pretty much the way it ended, with Lt. Byrd stopping by, sharing details of what we just saw with cameras rolling, notebooks filling and all of us glad to be able to soon leave.
According to Lt. Byrd, apparently the person with the assault rifle was real – police found shell casings on the ground outside the bar. But nothing and no one was found. Night over. Time to go home.
The Sit-a-Round
Sitting around at stories with other journalists is often fun. These sort of sit-and-wait news events lend themselves to us hanging around and getting to know each other, chatting about the stuff we’ve covered in the past, the characters we’ve covered, our lives and whatever.
Learned a bit about some of my colleagues, especially one local TV reporter and anchor who four years ago ran for Cincinnati’s mayor against Charlie Luken. He and I had never met, but he’d heard of the radio show I did this past summer (he did one once himself) and we got talking about the state of the city. He’s got a passion for this town that is inspiring, a caring that runs deeper than most. I share this with him on many levels. It was neat to talk to him.
Ah, home sweet…what?
Soon after all the media left and I tried to go home. Couldn’t though. Police were planning to keep the area closed for a while longer and the cops guarding the perimeter where unaware of what was going on, uh, again, near my front door. So now I am now typing this little ditty from the WAIF studios – about the only place close enough that I knew I could go that I could get in. I’m tired. I’m concerned. I’m frustrated.
People think I’m crazy for living where I do. Sometimes I think they’re right. It seems lately I have been feeling that more and more. Despite that, I’m convinced Over-the-Rhine, or OTR, as many call it, is a special place. Maybe you’ve heard it before: the architecture, the old buildings – all preserved, but deteriorating. Ironically, the abject poverty that set in here starting 40 and more years ago is what has allowed this neighborhood to stay pretty much the same. No money, no way to tear things down and build new stuff.
The only thing missing is the spirit that built this place, that made it this magnificent masterpiece, full of character and promise. I often walk the streets and wonder what it would’ve been like to have been living here 50 years ago. Or eighty years ago, or maybe even a hundred. Bet it was neat. Community-minded people everywhere.
OTR might just not be that special place for me right now. I wonder what it would be like to move a little farther south, into the true downtown. The crime rate is lower and the activity is centered around good restaurants, good entertainment and business (though it admittedly struggles, too). OTR has so many good people wanting to make it better. In the time being, though, I could be a victim of something horrific.
I heard one of the candidates this evening say there are 2,500 residents living in the central business district – what most would call “downtown” – right now. He said he would aim to increase that number to 10,000 during his time as mayor. Getting people to live downtown would certainly change the make-up of the people who hang out down there. It would undoubtedly make it better.
Along those same lines, had lunch yesterday with a friend who owns a restaurant in Over-the-Rhine. She, like me, believes the neighborhood could be more. But it just isn’t. At times it seems to be back-sliding. Not far and not fast, but it’s slipping. She called it a mess. I don’t want to admit it, but I think she’s right. It needs people like she and I, we both agreed, but geez, in the time being…
That former mayoral candidate and TV anchor said in the nearly two decades that he has lived here he’s seen a change, too. He said the town doesn’t know how to have fun anymore. When he got here Cincinnati – downtown – was a fun place. He likened it now to a kid growing up and forgetting how to enjoy itself.
I remember what he is talking about. A friend and I used to ride the bus downtown and hang out downtown- see a movie on the Skywalk, play video games at the arcade and ate at McDonald’s. I dare you to find a movie theater, a video arcade or a McDonald’s downtown. Heck, I almost dare you to find the Skywalk. Downtown in the mid-80s was a different place. I used to come downtown to visit my Uncle Steve who lived at t 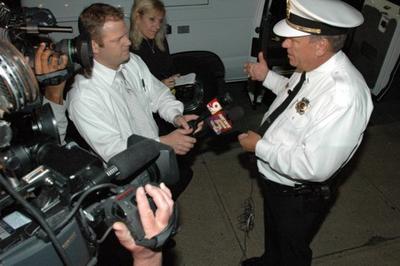 he 4th & Plum Apartments and was entranced by what I saw. Being a suburban kid, coming downtown seemed exotic and I guess really kind of was. My travels on the bus became a hot topic of discussion among my family and extended family at gatherings and dinner tables. I just loved it here – and I felt safe.
I’m not so sure that it’s just that the city lost it’s ability to have fun. I think too many people gave up too long ago and moved too far away to care that much about it anymore – even though we all point to downtown and Cincinnati when we talk about where we’re from. But I don’t see that magic anymore. I wonder what happened, why it happened. I miss it. And seeing the S.W.A.T. on my front doorstep as I wander home one evening after hearing two of the candidates for mayor is like buying a shiny new bike and then having it stolen upon taking it for its first spin. You wonder what’s the point.