Skip to content
Home > Family > Another party at Shelly’s 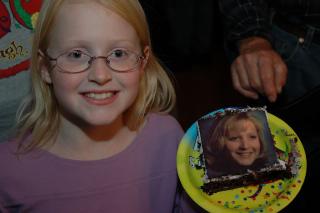 Holy Crap! Another birthday party at my sister’s house (this time her’s).

If you’ve read this Blog, you know we have a lot of birthday parties at her house. They’re all special, but I have to admit, this one was pretty cool. It was surprise party for her 30th birthday (she was sorta surprised).

I have one sibling, and though we’ve had our differences over the years (nothing more than most brothers and sisters), she’s a cool kid. I love her very much. She’s a great mother to her (count ’em) four children. Plus she’s a kind, caring person and pretty darn hilarious when she wants to be. Frankly, I don’t know how she does it. But those kids of hers are great, and as I grow older that and everything else makes our relationship all the more special.

All the usual suspects were at Shelly’s party (including my cousin Rhianna who had a piece of cake with Shelly’s likeness on it), plus some of my sister’s old friends and three of my cousins from Germany.

Last time I saw the German relatives? Four years ago. I’ll be posting more photos of them later (as soon as they let me take them). But it was so good to see them again. I am so lucky to have such a great and big family over there. I really need to get over to the motherland again soon. Maybe next year?

For now, though, enjoy another photo gallery from a party at my sister’s house.